We appointed Craig as our Musical Director in the summer of 2007. He joined us with a clear vision to improve the standard of our performance. Since then we have enjoyed singing at prestigious venues all around the UK including the Bournemouth Pavilion, the Harrogate International Centre and the Colston Hall in Bristol.

He is the Deputy Musical Director of The Great Western Chorus of Bristol where he has won multiple National Championships and represented the UK at international level.  From 2013-2016 Craig was the Musical Director of the Nationwide Chorus Coast to Coast. Craig is a qualified singing judge for the Ladies Association of British Barbershop Singers. He is also a coach and arranger.

In his professional life Craig is Head of Music at a local secondary school.

” If you’re a fan of Pitch Perfect and fancy yourself as a bit of an A Cappella singer, or simply want to book a quality act for your event, then look no further.  Bristol Fashion is a top notch singing group and you’d have to go a long way to find a friendlier bunch of ladies. “
Craig Kehoe,  Bristol Fashion MD 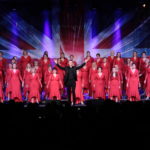